Macro and Global Risks – can they impact me?

While most businesses and organisations grapple with the operational risks facing them on a day to day basis, it is always good to take a step back and have a look at the macro, external and global risks out there and the possible impact they could have on you.

Some risks have grown from virtually almost nothing a few years back to becoming critical aspects in a very short space of time. One such risk is cybercrime where hacking of web-sites, data theft, ransom-ware and hoax mails have now become common place.

The potential impact of social media on the reputation of a business and international terrorism are other key “new” real risks. Climate change giving rise to extreme weather events are likely to cause increased physical risk to assets. Natural catastrophes, water crises and weak climate change responses could further aggravate these risks. Sweden has just issued a statement (March 2017) that it sees "a real and serious threat against its security" due to the “increased military strategic importance” of the country in the Baltic region.

The global economy and the markets themselves are vulnerable to shocks and there are many places where these shocks could arise. Investments are being made in an environment of heightened political and economic uncertainty. Many of the risks such as the geopolitical concerns created by Brexit, the election of Donald Trump, higher interest rates in the US and climbing debt levels in China are well known. But there may be significant global risks that businesses are not treating with the same degree of concern. One of these is the risk of investing in something that will have no value in future e.g. a long-term investment in fossil fuels or in related businesses in a world that is increasingly looking for alternative sources of energy. Policy risk and whether countries are making the right decisions and whether they have the ability and political will to see these through, being another major risk. Solutions to food and water shortages or technology businesses developing new sustainable ways of doing business will become critical.

The Global Risks Report put together annually by the World Economic Forum highlights what some of the other global risks are likely to be. It contains perspectives from nearly 750 experts from around the world on what the biggest long-term risks to the world are. 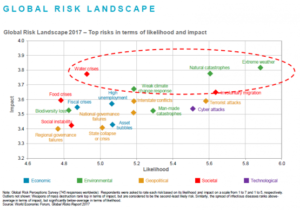 Note: Not all content will be available to non-members.

Please select a valid form
Do You Want To Be A Member?

If you want to become a member please go ahead and click on the button below.